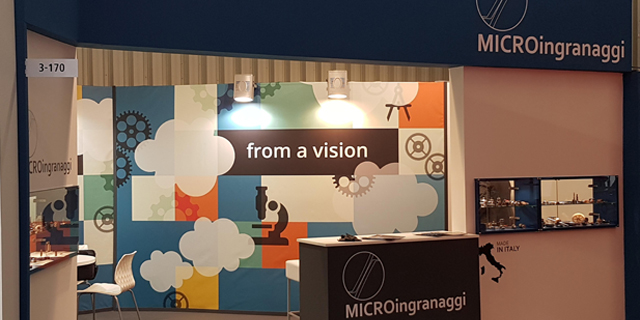 What features do you think one of the trade fairs in our industry have? Do you think Nuremberg SPS IPC Drives can be considered a “top” event?
Over the many years of visits and participations, and taking account of how the economic and trade fair landscape has changed, especially lately, (due to the emergence of the web, the evolution of communication means and the fewer economic opportunities, to name but a few) I have identified four characteristics that, in my opinion, a trade show must definitely have:

a high level from an organizational point of view, a non-excessive number of exhibitors, visitor quality and a reasonable duration (a period of three days is the best solution).

I’m discussing the subject of trade fairs again because last week the twenty-seventh edition of Nuremberg SPS IPC Drives was held, an international trade fair dedicated to the automation sector to which MICROingranaggi returned for the third consecutive time as an exhibitor.
So, returning to the original question, my opinion – moreover also supported by most of the people I’ve spoken to – is positive:

Nuremberg SPS IPC Drives continues to be a significant benchmark and one of the top trade fairs in the sector because it essentially bears all the four characteristics that I consider most important.

This twenty-seventh edition of the German event has obtained similar results to those of last year. According to the official figures there were 1,601 exhibitors and 63,229 visitors, of which 75.7% were German with a 24.3% attendance from other countries. On the latter point, however, my perception was somewhat different. Reasoning on the visits received at the MICROingranaggi stand, we actually noted a greater level of internationality of the visitors, in fact arriving from all around the world. First and foremost they were from China and India but also from different countries of South America, in addition of course to a high presence of Italian and Northern Europeans. This was in contrast to a decline in local visitors.

I wasn’t aware of any particular innovation regarding the products being exhibited. One important area of the event was dedicated to the theme of Industry 4.0, and my sentiment is that Germany has already fully assimilated and introduced opportunities into the industrial market that this new context is highlighting; many stands of electronics and computer science indeed based their own exhibition on products and solutions in this regard.

Having noted some of these solutions at Nuremberg SPS IPC Drives, the last consideration that I would make is more general and concerns so-called “joint stands“. I am not particularly keen on this type of solution because sometimes it proves to be a waste of money rather than an investment. Joint stands are often anonymous and the areas available to individual exhibitors are small and frequently go unnoticed. We can say that at most their functionality and usefulness depend on the work of selection and contacts research work that must take place in the weeks leading up to the exhibition simply because you can’t rely on the randomness of attendance and meeting. If the pre-fair work is successful, it is possible to make many contacts but this cannot be taken for granted.

What do you actually think of the National Industry Plan 4.0 devised by the Government?