An investment that could no longer be delayed 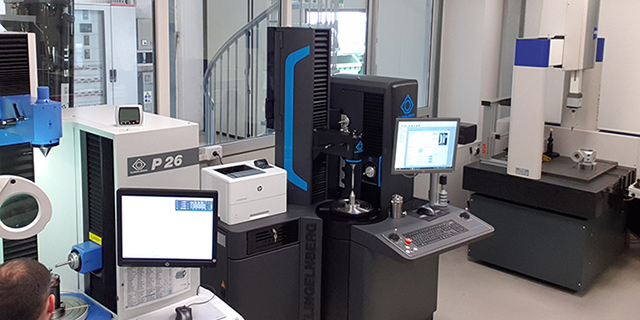 At the end of last year an electronic card on our evolventimeter suffered a technical failure. Naturally production did not stop, but the controls (which we now carry out more and more frequently), and therefore shipments to customers, saw some minor delays.
Luckily the situation was promptly resolved and our workshop resumed operations as if nothing had happened, but this episode set off an alarm bell.

First of all because, whatever the sector in which you operate,

quality control is taking on an increasingly more central and decisive role.

Not to mention the fact that, the higher the sector in which one operates or the critical level of the processing (for example due to a material that is more difficult to process), the greater the need for the pieces produced to be accompanied by documentation certifying the quality.

The tendency to certify orders – regardless of the number of reports drawn up – is therefore required by an increasing number of customers. Not to mention the fact that, for a company like MICROingranaggi, it is now becoming a fundamental internal requirement strictly linked to safety issues. The moment, in fact, in which a customer lodges a report with us (even years later) regarding a problem encountered following the use of a piece produced and sold by us, it is essential to have the relative quality certification at hand.

As I have said many times in the past, in fact,

correctly performed and, above all, well documented quality controls are a fundamental “safety system” especially for manufacturers like us, as they can become our lifeline if any complaints should be lodged.

I wanted to introduce this aspect to consider that the number of machines in our workshop has increased and continues to grow consistently, along with the growth in requests for certification of the parts we manufacture, investing in the quality assurance department again was, for MICROingranaggi, an almost mandatory decision.

If, therefore, back in 2009 in the midst of a full-scale economic crisis, we decided to equip our metrological room with a Klingelnberg 4-axes CNC evolventimeter ( a decision that many had deemed to be rather a high gamble, but still today I consider it to be one of the most far-sighted in the history of MICROingranaggi), today, five years down the line, we decided to repeat the move and to

equipped with all the necessary functions (roughness tests, tension header changes and so forth).

It was an investment that could no longer be delayed. First and foremost because our Klingelberg P26 has often found itself acting as a bottle neck for the reasons I mentioned earlier in this article. But also and above all because, in general terms, an instrument such as the evolventimeter allows us to fully monitor the qualitative level of what we manufacture, to be aware what can and what cannot be obtained from a given machine, and also to understand the differences between one machine and another (for example, a specific gear hob could offer greater quality guarantees than another for a particularly delicate processing phase).